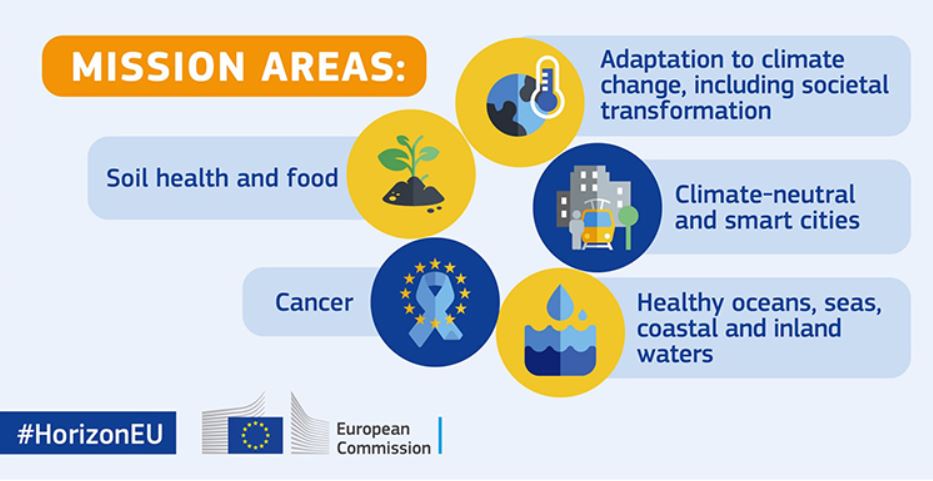 The Commission launched today five new EU missions, a new and innovative way to work together and improve the lives of people in Europe and beyond. EU missions aim to tackle big challenges in health, climate and the environment, and to achieve ambitious and inspiring goals in these areas.

A novelty of Horizon Europe and also an original concept in EU policy, bringing together several Commission services under the authority of nine College members, missions will support research to deliver on the Commission’s main priorities and find responses to some of the greatest challenges we are facing today: fighting cancer, adapting to climate change, protecting the ocean, seas and waters, living in greener cities and ensuring healthy soil and food. They are a new tool that includes a set of actions, such as research and innovation projects, policy measures and legislative initiatives, to achieve concrete goals with large societal impact and within a specified timeline. Five missions will aim to deliver solutions to key global challenges by 2030:

Margrethe Vestager, Executive Vice-President for A Europe Fit for the Digital Age, said: “Today, we have launched five new missions. A mission is a new and innovative tool – a new way to work together within Horizon Europe. They are also an original concept in EU policy. The missions are commitments to solve some of the greatest challenges we are facing today: fighting cancer, adapting to climate change, protecting the ocean, seas and waters, living in greener cities and ensuring healthy soil and food. It is a set of actions – research and innovation projects, policy measures and legislative initiatives, citizens’ involvement – to achieve concrete goals with large societal impact. We want to deliver solutions to key global challenges by 2030!”

Mariya Gabriel, Commissioner for Innovation, Research, Culture, Education and Youth, said: “The response to the coronavirus pandemic has shown that we can only tackle our biggest problems with a collective effort rooted in research and innovation. This is also the starting point of the bold and ambitious EU missions. They will mobilise the enormous potential of the EU and rally instruments and policies to achieve important goals. And all this together with the citizens, who are involved from start to finish.”

With its Communication on EU missions adopted today, the Commission is giving them the go-ahead, after the approval of the missions’ individual plans this summer.

EU missions in Horizon Europe and beyond

Missions are a new collaborative approach to tackle some of the main challenges of our times. They provide a mandate to achieve specific goals in a set timeframe. They will also deliver impact by putting research and innovation into a new role, combined with new forms of governance and collaboration, as well as with a new way of engaging with citizens, including young people.

For example, the Adaptation to Climate Change mission plans to make available €100 million for large-scale demonstrations to address major climate induced hazards, such as flooding, fitted to local circumstances. The Cancer mission plans to establish a novel joint governance model to ensure a systematic and effective integration of research, innovation and policy developments on cancer in Europe. The Ocean and Waters mission will create a network of lighthouses at sea and river basin scale to implement the mission and expand the networks of marine protected areas. In the Climate-Neutral and Smart Cities mission, selected cities will involve their citizens in drawing up ‘Climate City Contracts’ to help reach climate neutrality by 2030. And with the Soil Deal mission people will be stimulated to participate in citizen science initiatives to collectively improve soil health.

Rooted in Horizon Europe, mission implementation will go far beyond research and innovation to develop new solutions and improve the lives of Europeans. Their novelty and added value is in operating as a portfolio of actions involving different instruments, business models and public and private investments at EU, national, regional and local levels. For missions to be successful, support from other European and national programmes will be crucial. Each mission will have a specific timeframe and budget tailored to its challenge and implementation plan.

EU missions connect directly to citizens, engaging them in their design, implementation and monitoring. Member States, regions and a wide range of public and private sector stakeholders will get involved to help ensure lasting outcomes for all EU citizens.

The missions support Commission priorities, such as the European Green Deal, Europe fit for the Digital Age, Europe’s Beating Cancer Plan, An economy that works for people and the New European Bauhaus. For instance, Mission Climate is already a concrete element of the new Climate Adaptation Strategy, Mission Cancer of Europe’s Beating Cancer Plan and the Mission Soil is a flagship initiative of the Long-term Vision for the EU’s Rural Areas.

The Commission published a Special Eurobarometer on science and technology on 23 September. The EU-wide survey’s results testify to the popular support for science and innovation to find solutions to the challenges identified by the missions. For instance, Europeans overwhelmingly see health and green energy as the areas were science and innovation will have a positive effect on their lives in the next 20 years.

EU missions are launching today into their full implementation phase. The first Horizon Europe work programme for 2021-22, published on 16 June, includes a set of actions that lay the ground for their implementation. It will be updated with a full research and innovation agenda by the end of the year. In parallel, missions will engage with participating regions, cities and organisations, as well as citizens in the Member States.

Based on proposals that top experts in the Mission Boards handed over to the Commission in September 2020, five missions were identified in the Horizon Europe Strategic Plan. Horizon Europe provides initial funding to missions of up to €1.9 billion until 2023. In October 2020, the Commission validated the five proposed missions. They entered a preparatory phase to develop five detailed implementation plans including objectives, ways of reaching them and indicators for measuring performance. The Commission assessed these plans against specific criteria.

Implementation Plans for the EU Missions